Tam Giang Lagoon, a 75-kilometre-long stretch of water, separated from the ocean by a thin ribbon of sand, sits just outside the old imperial capital of Hue. In just under two hours from Saigon, we had arrived on the southern shore of the lagoon at Vedana Lagoon Resort & Spa. While a visit to Hue should be all about culture and history, a growing number of satellite resorts like Vedana now cater to those looking for an alternative: sand, sea and sun-drenched relaxation.

Day 1 – Doing Nothing
Sandwiched between fishing villages and rice paddies, Vedana offers a range of luxurious villas and over-water bungalows. We’ve taken a honeymoon villa, perched high on the hillside and hidden among the swaying grasses and banana trees. With a private pool, a large veranda, a bathroom bigger than our entire HCMC apartment, two showers and a separate lounge area, we spend the first hour of our stay bouncing around like helium atoms having been released from the pressure cooker that is Saigon. Then we relax.

We change into our swimwear (although, being overlooked by no one but the birds, it’s liberatingly optional), grab our books and hit the sun loungers. Like the fishing boats gently put-put-putting from one side of the vista to the other, time passes, chapters come and go and the sun soon begins its descent. At dusk we head down to the water’s edge to find two bicycles waiting for us. As one of several dining options available at Vedana, we cycle along to a romantic meal for two on our own private pontoon with our own waiter. 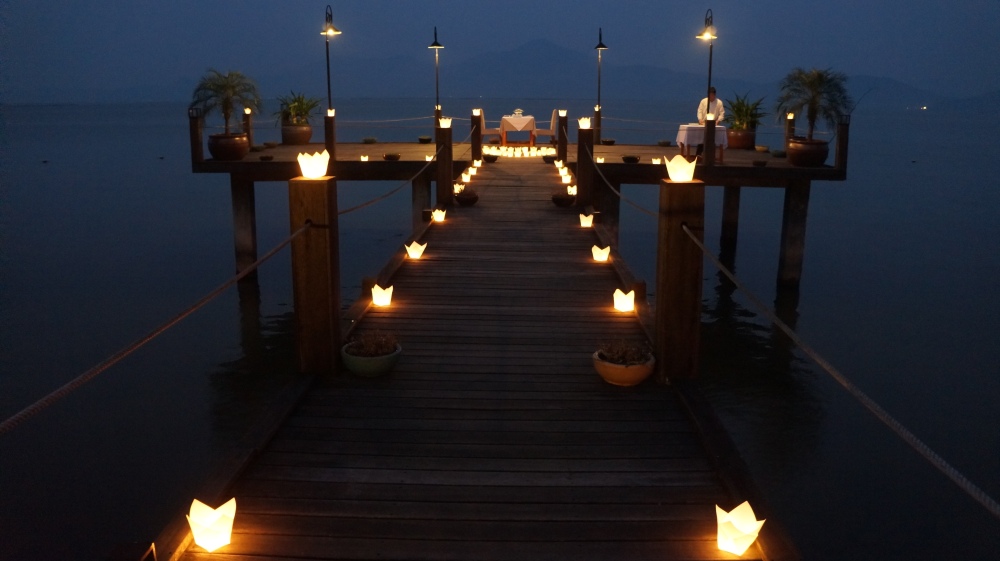 Day 2 – Doing… Something
7.30am and we’re at Vedana’s over-water spa. A 30-minute tai chi session leads into yoga which leads into a sprawling breakfast buffet at the nearby restaurant. If you don’t want to lift a finger, this is the place to come. But unlike some resorts, Vedana boasts a varied menu of activities and sightseeing options. In-house, there’s a well-equipped gym, table tennis facilities, volleyball and tennis courts, plus complimentary kayaks and pushbikes for exploring the lagoon. After breakfast we pedal out along the quiet country road that follows the shoreline, dodging dogs, ducks, cows and chickens as the surrounding mountains slide in and out of view through the morning haze. A woman tends to her rice paddy as her husband drives water buffalo out of the shallows.

If you are missing the feeling of sand between your toes, a daily free shuttle departs for Canh Duong beach, an untouched strip of sand 23 kilometres from the resort. For a spot of culture, Vedana also offers trips to the Truc Lam Zen Monastery, the tomb of Emperor Tu Duc and several more historical sights in the area.

Day 3 – Bach Ma National Park
Opposite Vedana’s entrance lies 40,000 hectares of tropical and sub-tropical wilderness. We take a guided tour from the resort, making the steep, 20-kilometre drive to Bach Ma National Park’s 1,450-metre summit by car. Tackling it on foot, says our guide, is not recommended. There are, however, plenty of hiking trails to be found along the way, making photogenic diversions to waterfalls, lakes and scenic lookouts. For nature lovers, the park is home to thousands of species of wildlife, including langurs, and, so the guide says, leopards, black bears and tigers. Today they’re all on holiday, it seems.

The final leg of the climb is an easy stroll broken up by a peek inside a tunnel system built by the North Vietnamese forces as they battled the Americans for control over this strategic observation point. The park’s story actually began in the colonial era when it was founded as a French hill station similar to Dalat. Many of the early villas and chalets were destroyed during the Indochina wars but recent restoration projects have turned the clock back and provided the park with a few quirky guest-houses and restaurants.

Day 4 – Hue
Departing at 9:30am daily, Vedana’s shuttle ferries guests into the centre of Hue and back, a 40 to 50-minute journey each way. Stopping right outside the gates of the citadel, it’s ideal for those seeking a whistle-stop tour before returning to lagoon-side paradise. We’ve checked-out and have cheekily used the shuttle to get us to Cherish Hotel in the city centre where we’ll spend the next two nights. After dumping our bags, we take a short taxi ride over the river to the large, majestic imperial citadel. It was constructed in the early 19th century and has become a UNESCO World Heritage Site, serving as the centrepiece to Hue’s many tombs, pagodas and temples. The number of US veterans strolling down the narrow streets reminds us that Hue was also the location of one of the longest and bloodiest battles of the American war, lasting from 30 January 30 to 3 March 3, 1968 and amounting in thousands of casualities.

Day 5 – The Demilitarised Zone
Truong Van Tam spins around in the passenger seat to show us his identity card. It shows his year of birth as 1958. “But I’m actually 62,” he says, “born in 1954. I forged my birth certificate twice, knocking off two years each time. We all did it. Some even blew their toes off with grenade fuses.” We’ve taken a tour of the DMZ with Stop and Go, a company that employs English-speaking locals who lived through the war to recount its history alongside their own personal experiences. Tam is explaining how he and his friends avoided conscription into the South Vietnam army. Born just south of the line which divided Vietnam in two in 1954, his stories are fascinating, and heartbreaking; about how he lost his father to an American artillery shell, about the terror he felt as US helicopters roared overhead, machine guns poised to cut down anyone who ran; how the same choppers would later return to drop candy, and how his home was eventually obliterated once the area had been targeted as a Viet Cong stronghold. History books can only do so much, but seeing these places for ourselves, being led by the people who were here at the time, is something we’ll never forget.

While Hue will no doubt remain a single-day stop off for many backpackers breezing through on their way to or from Danang, it’s definitely worthy of a few more nights for those who have the time.