When Simon Stanley spotted the ‘made in Vietnam’ tag inside his most trusted rucksack, he decided to investigate. Photos by Osprey Packs.

If you’ve ever gone backpacking, you’ll know this scenario well. Those times when your rucksack is bulging at the seams, overflowing with souvenir t-shirts, bubble-wrapped buddhas and baggy, one-dollar backpacker pants. The bus is leaving in five and you’ve still got to close the whole thing up. A busted zipper or strap right now could result in an embarrassing scramble on the pavement as everyone onboard watches you gather up your dirty undies into a bin bag.

Having only ever been spectators of such debacles during our travels around the world, my partner and I were glad to have chosen backpacks from one of the most trusted brands on the planet, the Colorado-based company Osprey Packs. After thousands of miles and day after day of stuffing them to their limits before handing them over to airport baggage handlers to play with, they still looked (and functioned) as good as new. It was only after settling in Saigon did we finally empty those packs to reveal the ‘Made in…’ label inside. Our Ospreys, it seems, have come home.

In the Beginning…
Osprey was founded by Mike Pfotenhauer in Santa Cruz, California, in 1974, when he began creating custom-made packs for a dedicated band of backpackers and travellers all drawn to his small shop by word of mouth. As a teenager in his home-state of Oregon, outdoor enthusiast Pfotenhauer had learnt to sew, with the help of his mother, and constructed his first custom pack at the age of 16.

By 1987, the company was producing rucksacks for the wholesale market, and in 1990 moved to Dolores, Colorado, where a skilled workforce of sewers, primarily from the nearby Navajo reservation, were employed to work in the factory.

Colorado is still home to Osprey’s headquarters today, but by the late 1990s, with domestic production costs rising and local fabric mills closing, the company’s future was in jeopardy. Moving production overseas would be vital to its survival. The decision was made and in the year 2001, Osprey’s production line arrived in Ho Chi Minh City, with Pfotenhauer, plus his wife and family, following soon after in 2003.

“Ho Chi Minh City is probably the top backpack manufacturing centre in the world,” says Pfotenhauer via Skype from Mexico. “There are places in China that build them, but if you want high-end, you have to go to Vietnam.”

With his products going to the tops of the world’s highest mountains, gracing the backs of professional and amateur athletes, climbers, sportsmen and women and travellers, Osprey bags are, indeed, some of the best in the world. They have to be. “We only build backpacks,” adds Pfotenhauer. “We refuse to go into outerwear, like tents or clothing, because we feel backpacks are extremely complex in their design.”

While the 62-year-old has since returned to the company’s HQ in Colorado, where marketing, research and distribution is handled, Osprey’s Saigon office continues to thrive. In January of this year it moved into a new, purpose-built product development complex in Thao Dien. From here, a team of 44 staff oversee the entire design and production process, utilising five Korean and Taiwanese-owned factories on the outskirts of the city, the largest of which employs around 2,500 workers, with roughly 80 percent of them working on Osprey products at any one time.

It’s a scenario that’s quite unique in the rucksack industry, where most brands and their factories sit thousands of miles apart with only a limited window of development open before going into full-scale production. “The difference between us and the other famous brands is that we do our own product development,” explains Pfotenhauer. “If you need to build 20, 30, or 40 different prototypes before you get it right, you simply can’t do it if your product development is done inside the factory. Just about everybody else does it that way. [But] we control the design, so we’re able to keep a much tighter control on that, and develop it to a greater extent.” 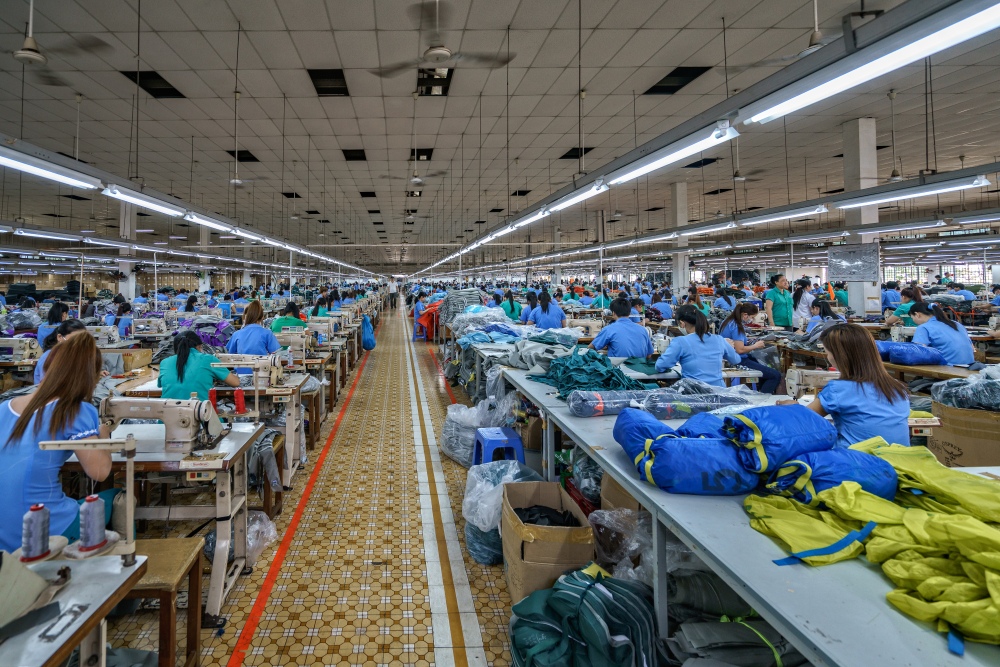 Buying Local
With daily visits to their production sites, Pfotenhauer adds that Osprey has built relationships with them that are about much more than just getting a good product. “There’s an ability to know what’s going on in the factories,” he says. “The management and ownership is always warm and friendly so we can communicate with them on factory conditions for example.”

It’s also a setup that helps to keep Osprey products from appearing at your local market alongside the usual lineup of counterfeit outdoor brands. “It’s not easy to see where counterfeiting happens – either if you’re having your product knocked off by small-time factories, or when your own product is going out the back door – but we’re just very good at keeping an eye on that. If we find out where it’s coming from, we stop it, either at the factory or we’ll go down to speak to the shop proprietors.”

Innovation and Quality
Even after 40 years in business, with his Vietnamese team having grown from one person to almost 50, and over one million units produced annually, every new product and design still passes through Pfotenhauer’s hands. Functionality, durability and fit are still top of his list.

“We like to pride ourselves on both innovation and quality,” explains Osprey Vietnam’s managing director and VP of product Chris Graham. “We try and offer something unique, a better solution to an existing problem. This can be the way an item is internally organised, or the suspension that connects the product to your back. All of our products are backed up with a lifetime warranty too, our ‘All Mighty Guarantee’, so the construction needs to be durable.”

While Vietnam remains a hotbed for the outsourcing of skilled labour, 15 years after first arriving in the country, Osprey shows no signs of moving on, even with the lure of cheaper labour beckoning from foreign shores.

“Vietnam is developing fast but so are the employees, the suppliers and the possibilities,” says Graham. “We are fortunate to be making premium products, so price is not an absolute driver, and hope that with the completion of the Trans-Pacific Partnership we can see pack production in Vietnam for a long time to come.”

“I find that working with the Vietnamese is always an enjoyable experience,” adds Pfotenhauer. “They work hard, they understand what it is that you want and they’re highly skilled.”

For anyone in Vietnam hoping to get their hands on what could be the last rucksack they’ll ever own, unfortunately a retail operation here is yet to be established. “Our core products are for ‘Hike, Bike and Alpine’,” explains Graham, “areas that are not yet common in Vietnam. We hope that this changes in the coming years as we enjoy supporting events such as the Tai Lai Jungle Race and the Ho Tram Triathlon. Our products are on sale in Hong Kong and Taiwan for those looking to buy nearby.”